In 2009, TPRF Founder Prem Rawat visited the small town of Mazara del Vallo in Scicily. He came to speak to the town government, citizens, and students on the subject of peace.  His address and subsequent question and answer session with students of Mazara has inspired a “Week of Peace and Solidarity” celebration (May 23-28) to promote understanding, tolerance, and a culture of peace around the world. The Mazara Town Council made Prem Rawat an Honorary Citizen of the city. Here is a preliminary report on the first annual Week of Peace and Solidarity from on-the-scene guest blogger Giuseppe Buffa. 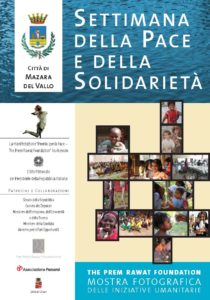 Poster Announcing the Week of Peace

Preparations for the Week of Peace and Solidarity are underway in Mazara del Vallo, Sicily. Mazara is an incredibly peaceful city overlooking the Canal of Sicily, the channel in the Mediterranean Sea between Sicily and Africa. It is a short distance from the ongoing scenes of war and revolution that have been going on for several months in North Africa. From time to time in the early morning, you can hear the sound of fighter jets on their way to Libya, and you wonder how war can rage so near such a beautiful little city that is so peaceful and well integrated with Arab culture.

Here in Mazara you can comfortably be a Christian, Jew, or Muslim. These three cultures have lived peacefully together here for almost eight centuries.  When you look at the Mediterranean, you cannot help feeling the peace coming from it. A friend of mine commented to me yesterday, “Look Giuseppe, even the sea seems to be in synch with Mazara’s Week of Peace!”

On Monday, we were all amazed by the words of Mazara Mayor Cristaldi at the press conference for the official opening of the Week of Peace. He said words put in motion bring changes and the recent revolution in Tunisia may have actually begun long ago.

He commented that the words “tolerance” and “integration” imply one group or person is “higher and has to tolerate somebody else who is lower.”  On the contrary, the Mayor pointed out, that the more powerful group has a social responsibility to integrate with the less powerful group. He thinks it is better to have a dialogue between different but equal multicultural and multiethnic groups.

The Mayor expressed the hope that by the end of the Week of Peace in Mazara, there would be a solution for the problem of divisions in the Arab world, including the conflict between thePalestinians and the State of Israel. He suggested that what will happen here may be small but could change the destiny of humanity.

I felt so happy to hear these words! The Week of Peace is opening with such a deep feeling of clarity! I will continue to write about a few more wonders from Mazara as the week unfolds.