Welcome to the Peace Club 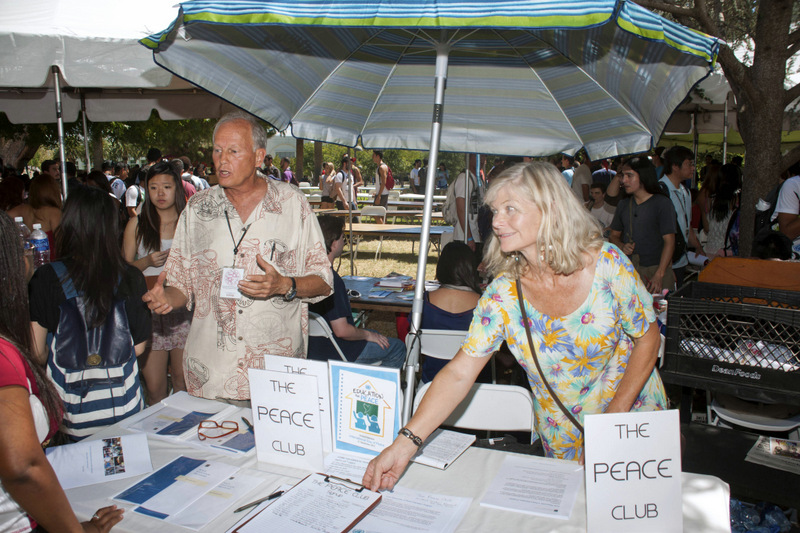 Victor Kamont, 61, returned to higher education at age 57, following his desire to support Prem Rawat in spreading his message of peace. He now holds degrees in Journalism; Photo-journalism and Arts & Science from Pierce College, CA. Michelle Cameron was born and raised in Liverpool England and moved to California in 1976. She is a clothing designer, entrepreneur, mother and grandmother. Michelle volunteered to help out at the Peace Club booth at a recent “Club Day” for students at CSUN. This is Michelle’s story about her day at the booth.

The first week of September 2013 was the hottest week of the summer in the San Fernando Valley (Los Angeles) with temperatures soaring past 100 degrees Fahrenheit. 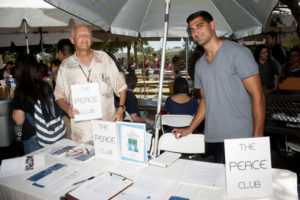 Victor Kamont with Usman Khan–VP of The CSUN Peace Club

We were on the campus of California State Northridge, a huge, modern campus of thirty-six thousand plus students during the first week of the fall semester. In the early morning, two of us took turns waiting for hours in a line curling around the quad for the opportunity of securing a table to promote the new Peace Club. Victor Kamont, a new student at Northridge, hoped to get the project going THIS semester with the challenge being that “Club Days,” when students and clubs get together to meet, happens before the school administration approves new clubs.

We weren’t even supposed to be there, not yet officially being a club. But through Victor’s persistence and by getting up early and waiting for a vacant table, we had at least a chance to meet and sign up club members.

By the time I reached the head of the line, all tables in the shade were long gone, but I was thrilled to be given any table!

As both the sun and the temperature rose, I set up our signs, materials, and most importantly, our sign-up sheets, as we waited for the students to arrive.

It was my responsibility to work the table when Victor was attending his classes. Before he left, he coached me on his vision: 1) The Peace Club would be hosting a Peace Day Celebration on campus on September 21—the UN sponsored International Day of Peace. 2) The Peace Club would be hosting TPRF’s Peace Education Program, which Victor pointed out, tied in nicely with the UN’s declaration that 2013 be designated the Year of Peace Education.

Then the throngs arrived. 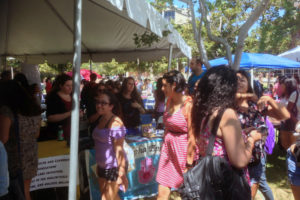 For a few heartbeats, I thought the passing students were going to ignore us in all the noise and excitement of sorority and frat clubs, football clubs, band nights, and all the rest. Then, one person after another stopped, attracted by our simple “Peace Club” signs.

Each person asked what the club was about. Almost everyone who stopped listened carefully, looked through our materials, and then added their name and information to our sign-up sheet.

I have rarely experienced so much openness and interest. We barely even noticed the heat!! By the end of the second day, sixty-four students had signed up for the Peace Club.

Thanks to all involved in putting together such a fabulous curriculum. And most of all, thank you, Mr. Rawat. 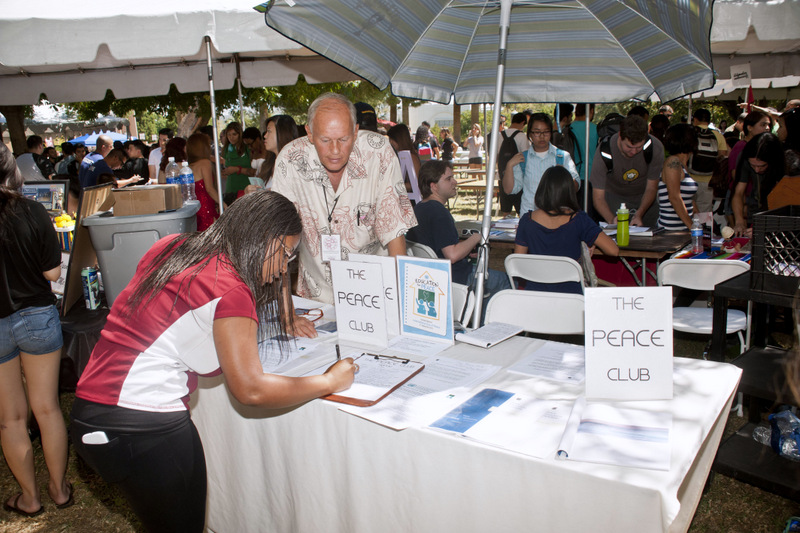 Student Signs Up for More Information