The Gift of Sight

To children, the gift of sight is invaluable for a healthy, happy, well-rounded life. In the poverty-stricken, war-torn Palestinian territories, blindness is ten times more likely to occur than in the West. Fifty percent of the population in East Jerusalem, the West Bank, and Gaza – one of the fastest growing areas in the world – are under the age of 18. TPRF has made three grants totaling $70,000 to the Saint John Jerusalem Eye Hospital (SJJEH) to help provide eye care to 30,000 children in the area.

SJJEH Chairman John Talbot acknowledged TPRF’s support by saying, “The continued, generous support of The Prem Rawat Foundation this year will permit the St. John Eye Hospital Group to expand and improve our much-needed services for the children of the Palestinian territories. Congenital eye disease and disfigurement are rife amongst the younger generation in the Holy Land, and our work ensures that many young people grow up with more opportunity to learn and become productive adults in an already difficult environment.”

Here is a case study excerpted from a recent report from SJJEH that illustrates the Hospital’s work. 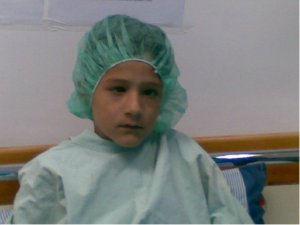 Ahmed Elnajar lives with his parents, two brothers and three sisters a small, two-room house within one of the refugee camps in the Gaza Strip. His father is unemployed.

Ahmed’s father became concerned about his son after the boy suffered an injury to his right eye from a stone throw.  His vision began to deteriorate. The injury induced a cataract in Ahmed’s eye.

When his friends began to call him names due to the defect in his eye, Ahmed’s father took him to the local municipal eye hospital in Gaza.  There, Ahmed underwent an operation that was unsuccessful.  Mr. Elnajar lost hope that his son would ever regain his sight.

Relatives and neighbors advised the Elnajars to take Ahmed to the St. John Eye Clinic in Gaza, where our doctors treated him.

The doctors immediately scheduled Ahmed for an operation to remove the cataract and replace it with an intraocular lens (IOL).  A team of skilled medical staff successfully performed the operation in our Gaza operating theatre.

After his treatment, Ahmed was again able to play with his peers, and to read and study properly at school to the delight of the family.  Mr Elnajar said, “ I am very grateful to St. John, as Ahmed can now be like other children and take part in the world around him again.”