The Chief Plays a Vital Role

Many factors will affect the development of the Food for People facility in Ghana. One important ingredient in the recipe for success involves establishing a working relationship with the tribal Chief of the Ga East Municipal District. Chiefs play a vital role in Ghanaian society, as outlined in this report by blogger Bobby Hendry:

The recent dedication of a parcel of land for the FFP facility by the local chief is a major step forward in making the FFP project in this area possible. So I decided to do some research on the role of chiefs in Ghanaian society.

Starting in the late 19th century, Europeans conquered and colonized most of Africa. Modern-day Ghana is comprised of Britain’s Gold Coast colony and the British part of Togoland, a German protectorate that eventually fell under the control of Britain and France.

Ghana achieved independence in 1957. Its prime minister (and later first president), Kwame Nkrumah, named the new country after the great ancient empire of Ghana. “We take pride in the name of Ghana,” he said, “not out of romanticism, but as an inspiration for the future.” 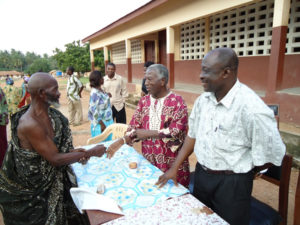 There are dozens of tribes in modern Ghana, and the country’s constitution guarantees the institution of chieftaincy. Although the constitution does not allow chiefs to participate in politics, they play an important role in society. The National House of Chiefs has authority over traditional laws and customs. In addition, chiefs have a great deal of influence in the community, especially regarding the ownership and sale of land.

The village of Otinibi is in Ga, the name of the area around Accra, including Accra itself and other large sectors, primarily along the coast. The tribes in the area are known as Ga Adangbe. Ga is also the name of the local language.

A significant function of the chiefs, besides a shared care for their communities, is their ancient ownership of the land. Even the Government has to negotiate with the relevant community chief for any piece of land they want to purchase.

I asked two of the FFP project coordinators, Sam and Emmanuel, who the people feel the most allegiance to, and they told me it was definitely their chief. They explained that the process is very democratic, and the chiefs take their responsibilities to their communities very seriously. This is why the villagers were very happy about the parcel of land gifted to TPRF for the Facility. In their view, the food that will be available for the local people, especially the children, is the result of the charitable efforts of the chief of Otinibi.