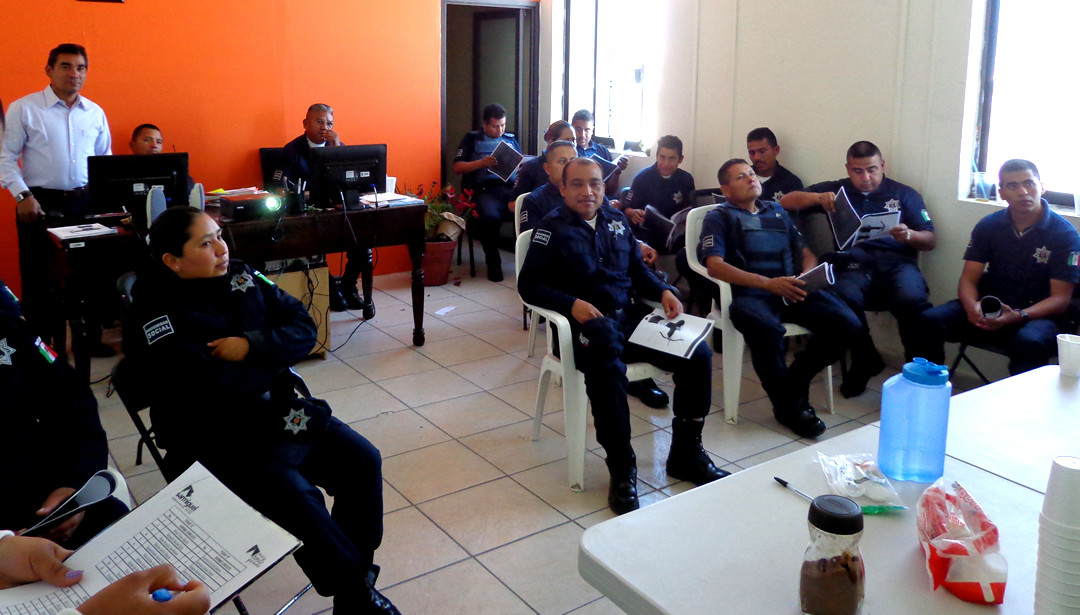 San Miguel de Allende, a small town in the Bajio mountains of central Mexico (170 miles NW of Mexico City), is now a hotbed of Peace Education Program (PEP) activity due to the enthusiastic efforts of two local volunteers.

Jean-Paul Peretz first heard about PEP in Miami several years ago and was determined to become involved after hearing inmates speak of their positive experience with the program.

After moving to San Miguel de Allende last year, Jean-Paul met Oscar Arcos, a local physical therapist, and they decided to start a PEP series at a drug and alcohol rehabilitation clinic in February2014. It was very well received, and one participant said, “I feel like my heart is starting to work again.”

Jean-Paul and Oscar (both of whom speak Spanish) next approached the chief of police in their town, and he agreed that the introduction to PEP could be shown to three separate shifts of officers and also a cadet class. The full ten-week sessions then began in March with participants first working their 12-hour night shift before attending class in the morning. One officer commented that the program “really helped change my attitude at home…. It helps me relax.”

Another Peace Education Program was started in April for the inmates of the local jail. “It’s been challenging because of the changing population but very rewarding,” says Jean-Paul. “I recently had a wonderful heart-to-heart exchange with one of the inmates during the program. My Spanish is not the best but his eyes told the story,” he explained.

In early May 2014 the Rotary Club’s Ambassador for Peace, Rebecca Crall, visited San Miguel de Allende and determined that The Prem Rawat Foundation’s Peace Education Program was one of the city’s exemplary peace programs that could be a model for the world. The 500-year-old city is presently striving to fulfill United Nations requirements to be awarded “Culture of Peace” recognition.

Under the auspices of a local peace organization, Camino de la Paz, Jean-Paul and Oscar were asked to give three separate presentations (two in English and one in Spanish) to groups of citizens interested in peace. Out of 40 attendees, 15 came forward to attend the PEP program or volunteer to help. “This is so rewarding. It’s easy to visualize this growing exponentially,” declares Jean Paul.

“The next step is to work with the volunteers to introduce PEP to other institutions, become facilitators themselves, or perhaps help out financially,” adds Jean-Paul. “This feels ready to bust out.”