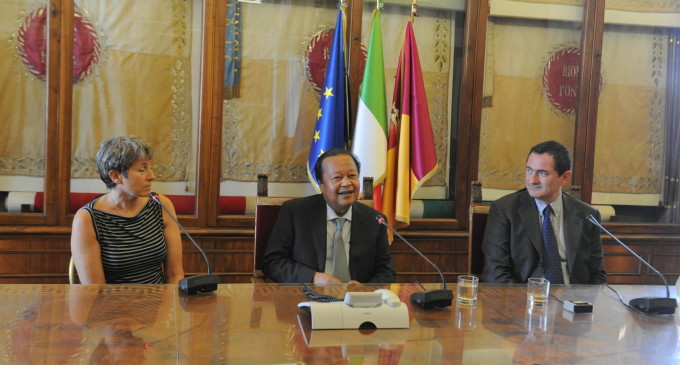 On May 18 Prem Rawat spoke at the prestigious Convitto Nazionale Vittorio Emanuele school in Rome, capping an event that aimed to develop a culture of peace among young people and teachers. The program was beamed through a live video feed to over 4,100 students in 70 classrooms at four similar schools in Italy. 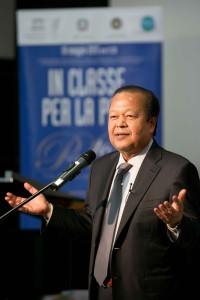 Convitto Nazionale is a signatory institution to the Bruxelles Declaration known as the “Pledge to Peace.” As part of that declaration, Mr. Rawat was appointed in the Italian Senate by the First Vice President of the European Parliament Gianni Pittella as an “Ambassador of Peace” and had previously addressed the school in 2012. Since then Covitto Nationale had extended an open invitation to Mr. Rawat, and his return came as part of an effort to support the Bruxelles Declaration and invite UNESCO schools to collaborate on a new peace course.

Prior to the event, the Rector of Convitto Nazionale invited Mr. Rawat to a meeting with teachers for an informal discussion. One of the questions concerned building trust with the younger generation. Mr. Rawat suggested that educators needed to focus on helping them realize their potential. Teachers, he noted, are tasked with great responsibility and can play an important role in helping build a better future. To help achieve this goal parents should show more respect to teachers, he said. 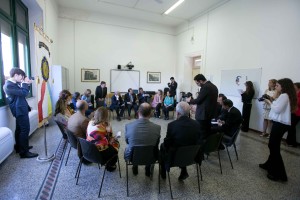 The main event was entitled “Peace in the Classroom” and Mr. Rawat told the students to make peace a priority in their lives.

“I know you are young. There are many good things waiting for you, and there are many challenges awaiting you. The things that are good in your life hopefully will propel you to be more focused, more centered as you look for peace,” he said. “The difficult times are going to push you, derail you away from that. Whatever happens—in good times and in bad times—keep the focus. Never ever lose sight of the peace that dwells inside of you.”

The next day, Mr. Rawat spoke to dignitaries at another event in the Italian capital building. The event was covered by the Roma Daily News here. See below for an English translation of the media outlet’s story:

Mr. Prem Rawat, Ambassador of Peace, was received today in Campidoglio. The 58 year-old Indian is known for awakening awareness of friendship between communities and for his commitment toward promoting human rights.  Mentor and main inspirer of the Brussels Declaration’s “Pledge to Peace,” he was awarded with the “Asia Pacific Brands Association’s Brand Laureate Lifetime Achievement” honor and many other awards. 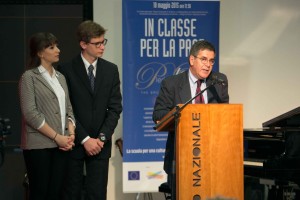 Mr. Paolo Masini, Councillor for Schools with a mandate for Interreligious Dialogue, received Mr. Rawat at Sala delle Bandiere in Campidoglio. During the meeting, Mr. Rawat addressed delegates of associations involved in promoting the topic of peace and introduced the Peace Education Program (PEP). The program is promoted by his Foundation and has been recently presented at public libraries in Rome.

“When I left India, many years ago, Rome was my first stop-over. Here I faced my first challenge: to understand how a Western country would react to my message,” Mr. Rawat said. “Being able to come back here and talk about peace is an honor for me. The word “peace” does not mean the same thing to everybody: for some it is the absence of war, for some it is friendship between nations. I don’t care what you call it. Peace is an inner feeling, not a topic to be discussed.” 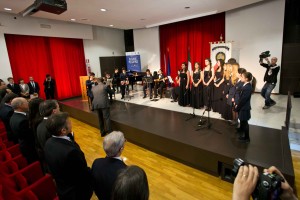 “Receiving Prem Rawat in Campidoglio is an honor for us,” stated Mr. Masini. “In these times, when fundamentalism is endangering serenity between communities, it’s important that the message of an historical bearer of peace is sent from the ‘home of all the Romans.’ Rome has a tradition and a calling for dialogue between different creeds and cultures; the Jubilee will represent the highest moment for disclosing these attitudes, through the many initiatives aimed at acknowledging the others that we are preparing.”

At the end of the reception, the Councillor awarded Mr. Rawat the silver cup of Roma Capitale–the symbol of the Roman spirit of friendship and the religions calendar, made by Religions for Peace Italia and the Department of Schools, Sport, Young People Initiatives and Participation.