Helen Caton travelled from her home in the United Kingdom to join the celebration of the Week of Peace and Solidarity (May 23 to 28) in Mazara del Vallo, Sicily.  This is Helen’s story.

We arrived in the City of Mazara del Vallo on a calm evening, with the sunset reflecting off of a still sea and the moon climbing into the clear heavens. Walking down the shoreline to one of the many welcoming restaurants felt so relaxing.  The local eateries specialize in seafood, pizza, strong Sicilian wines, and the best coffee in the world—all delivered with crisp white linen and old-fashioned courtesy.

This pleasant setting belied the tragedy that occurred just a few miles offshore not long before Prem Rawat’s arrival. Around 240 lives were lost as  desperate refugees overfilled  a boat taking them away from the conflicts in Northern Africa. This tragedy colored the Round Table debate at the Town Hall on Wednesday night, attended by Linda Pascotto, President of TPRF. We heard eminent academics and politicians discussing the many causes of conflict as well as  political, social, and educational solutions. We also heard how welcoming the people of Mazara have been to those refugees lucky enough to reach the city’s safe harbor. I was moved by the simplicity of Linda’s response to the discussion—how the very feeling of personal peace is, in itself, a solution. Hearing her explaining Prem Rawat’s message of peace in the context of the recent conflict was powerful by contrast.

On Friday morning, we met again in the Town Hall. Prem Rawat attended the gathering to present prizes to the winners of an essay competition. Prem Rawat’s public addresses delivered to audiences around the world inspired the competition’s theme of peace.  I was deeply touched by each of the winning entries. The first group to be honored, from a local school, donated their third-place prize of a computer to a local charity, another example of that generous Mazara spirit shining through. The first-place winner proposed a multimedia presentation for messages of peace.

Despite the celebration among these winners, the mood of the gathering was tempered once again by the political speeches, especially one by a member of parliament who told us how hard it was for her to even speak about peace. Her face had the look of someone driven by the suffering of others and a hunger for peace. As Prem Rawat spoke, it seemed that he too had been touched by her words. He made peace seem very near, very possible, even in the midst of the conflict and suffering.

Our next stop that morning was to attend the unveiling of a “stile”—a beautiful piece of rose-colored marble taller than me, inscribed with a quote from Prem Rawat, “Peace begins in the heart of all human beings,” in Italian, French, English, and Esperanto. The unveiling occurred in a town square near the remains of a medieval castle that once looked out over the harbor and across the sea.  The event attracted the press, a police motorcade, and an enthusiastic crowd.

Late that afternoon, we enjoyed the treat of watching the final event in the Week of Peace and Solidarity: music, dancing, and speeches in the main square in front of the newly unveiled  stile. Young and old turned out to watch and listen. There were people looking down from their balconies and children playing in the park.  Prem Rawat’s talk started with a story and a joke, yet I felt like he was issuing me a challenge: to make peace a reality in my own life, to see the humanity in everyone—everyone—to use my brain, and to live with integrity.

His words made peace feel so possible, despite the conflict just 80 miles away across the sea. I hope I always remember his encouraging words: “If you want to be rich, be generous. The quickest way to be powerful? Be gentle. The quickest way of finding peace? Look within.” 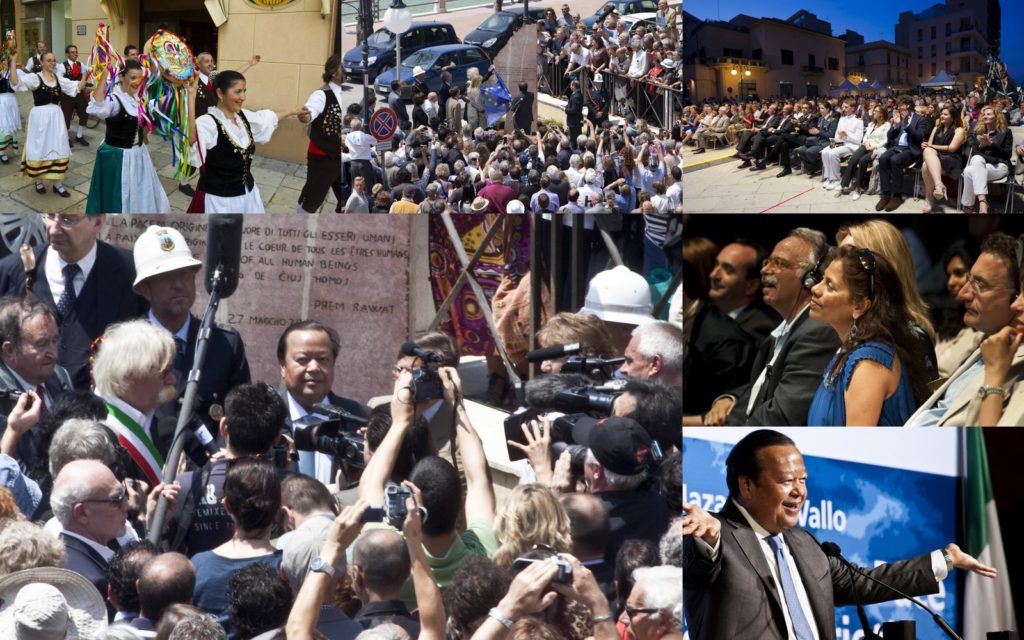 Concluding Events of the Week of Peace and Solidarity