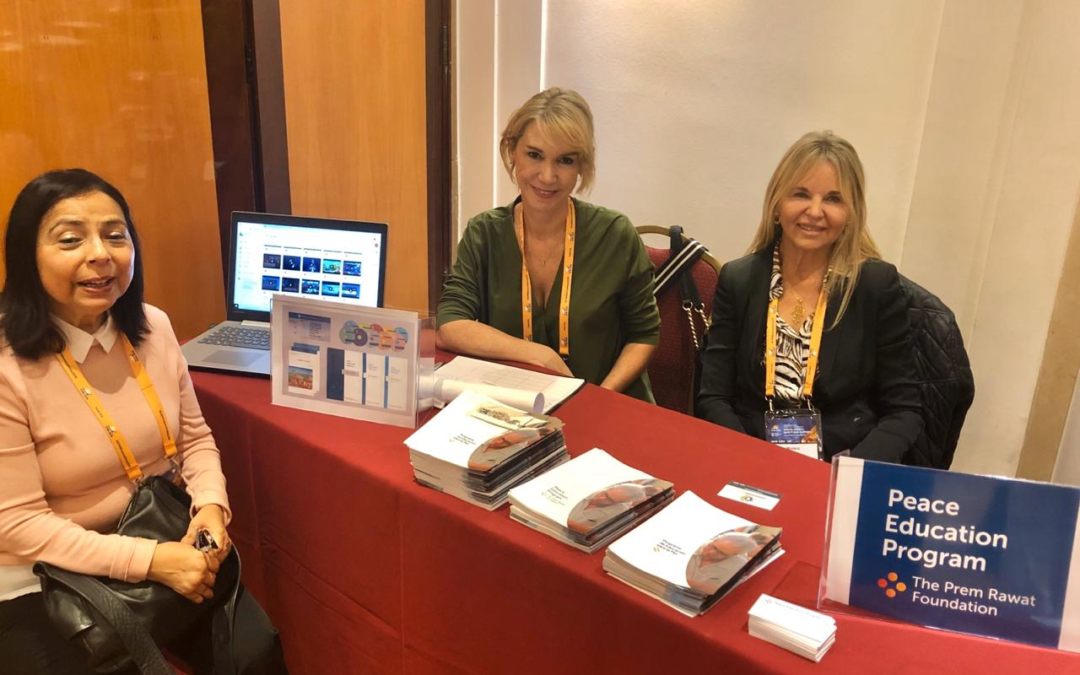 Teamwork is most effective when members respect, trust, and communicate honestly with each other, providing consistent support. Thankfully, a team of six volunteers with the Peace Education Program demonstrated teamwork at its best at the 2019 International Corrections & Prisons Association (ICPA) conference, held October 27 to November 1 in Buenos Aires, Argentina.

The theme of the conference was “Strengthening Our Correctional Cornerstones: Rights, Dignity, Safety and Support.” It reflected a growing understanding among prison officials worldwide that the rehabilitation of inmates is more likely to happen when their dignity is restored. 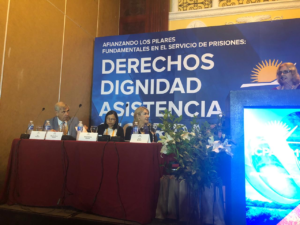 The Prem Rawat Foundation (TPRF) cultivates “Dignity, Peace, and Prosperity” for all through its Peace Education Program. Featuring inspiring videos of Prem Rawat’s talks, the peace education workshops are held at a wide variety of organizations around the globe. Through a gradual process of discovery, participants are able to experience a deeper sense of hope and contentment. The workshops have been especially successful in prisons, where inmates have taken Prem’s words to heart: “The attainment of peace is the highest human potential.”

Top-level prison authorities from 77 countries attended the ICPA conference. Multiple presentations by over 100 speakers occurred simultaneously throughout the event. There was a strong turnout at the Peace Education Program presentation—a full room. Some had already heard of the program’s transformative impact on inmates and came to find out more.

Ivete Belfort, from Brazil, was MC. She gave a brief introduction and account of the program’s great success in Brazil, where she was instrumental in helping establish the program in 2011. Over the last three years, about 7,000 inmates in 23 prisons in Brazil have attended the workshops. She spoke of countries like Peru, Mexico, and Trinidad and Tobago, where an increasing number of prisons offer the workshops. In Panama, 10 prison guards have been trained to facilitate the workshops for inmates, with the results earning support from the government. 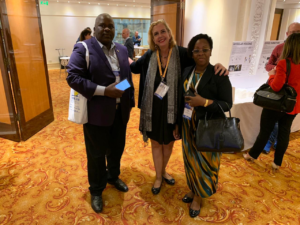 Three other facilitators followed. Each gave 3-minute presentations on how they and their teams introduce the program to officials, and train interested individuals and groups to become facilitators. This enables the program to grow exponentially.

Martha Elena Pineda, a marketing consultant by profession, started the Peace Education Program in Colombia in 2011, with an emphasis on prisons. Three thousand inmates in five different cities have benefited so far. “All of us who work to support the rehabilitation of people deprived of their liberty are aware that hopelessness is a frequent feeling among them. It has helped many inmates recover the hope and inner strength they have lost,” Martha Elena told the audience. “Because of the inspiring messages presented to the inmates in the course, they talk about clarity, gratitude, awareness, and understanding. They say that what they learn in the workshops is preparing them to be good people to themselves, to their families, and to society when they are eventually released.” 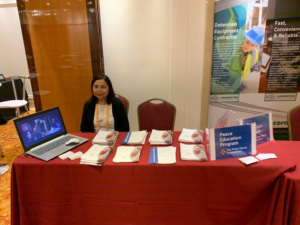 Silvia Acosta talked about the growth of the Peace Education Program in Argentina. First held in several units of a Federal Women’s Prison in Buenos Aires, the course has been well received in 14 prisons throughout the country since 2017. “Initially, inmates are often shy about expressing themselves but as classes continue, they begin to talk about themselves and their experiences of life. The workshops create an environment of deep learning. Two prison directors who attended one of the workshops invited us to carry out the program at a prison school. Of the 739 inmates in that prison unit, 347 have now attended the course. We also facilitated workshops at the Cadet School of the Buenos Aires Penitentiary Service, where the 111 participants will work as prison guards one day.” 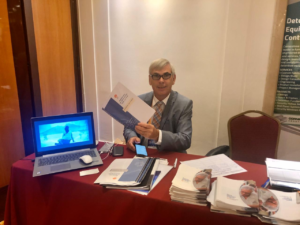 Ted Urguhart had similar experiences since peace education launched in Chile. “We presented it to a variety of institutions including retirement homes, social centers, schools, schools for the disabled, companies, and drug addiction centers. These efforts were well received and built up the reputation of the Peace Education Program in Chile.” Once it became successful in the prison system, the volunteer team was asked to give two facilitator training courses this spring to the professors at the Colina 1 Penitentiary in the city of Colina. Ted said, “We feel that the best way to offer the workshops to the inmates in the Chilean penitentiary system is through the training of their own professors in the prisons’ education system.”

Facilitators Monica Ureta from Chile and Teresa Zumaran from Uruguay provided support, with help from TPRF. 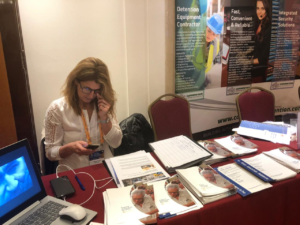 At the ICPA conference, the team shared equal responsibilities, meeting with people from many countries over the four-days. Ivete, a business administrator who speaks several languages, said, “We applied all our skills at the conference. I was able to talk to prison officials from Portugal, Spain, and Latin America. I had conversations with ones from Morocco, Cote d’Ivoire, and Mozambique who planned to present the course to their prison boards.”

Ivete met a Ugandan official who was surprised to learn that there are peace education workshops happening at a Brazilian prison for sex offenders. “After I told him about the positive effects the course was having on them, he wanted to make the program available to sex offenders in Uganda,” Ivete said. 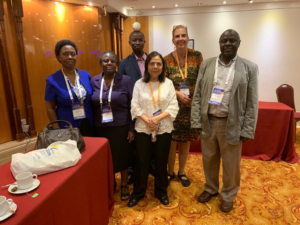 The facilitators took turns at the Peace Education Program booth, and attending as many presentations as possible. Ivete said, “We never expected that prison authorities would be so warm and friendly!”

When the conference ended, the facilitators shared information with each other. One of the most promising presentations had been by Socrates Software, developers of a digital tablet for prisoner education. Prisons in England are already using them. The peace education facilitators are now exploring how to bring the Peace Education Program to inmates on these digital tablets soon. The program is already having great success on a similar tablet platform in the U.S.

The team said that working together was fun. They became more confident and efficient. It allowed them to plan to work together in the future.

The facilitators have since followed up with their individual contacts. Teresa spoke to the corrections official from the Dominican Republic who said that permission was granted to offer the workshops in their prisons. The Dominican Chief of Prisons and Fundcacion Genesis, which supports inmates with health issues, such as HIV, acquired a program license and will begin classes in February 2020. An Ethiopian official at ICPA, Jeshi, told the peace education team that their presentation was the best one at the conference. He has already implemented the Peace Education Program in Ethiopia.

The team is excited to see how the rest of their efforts unfold. “Our experience at the conference was amazing,” said Ivete. “And the 2020 ICPA event in Hong Kong will be even better!” 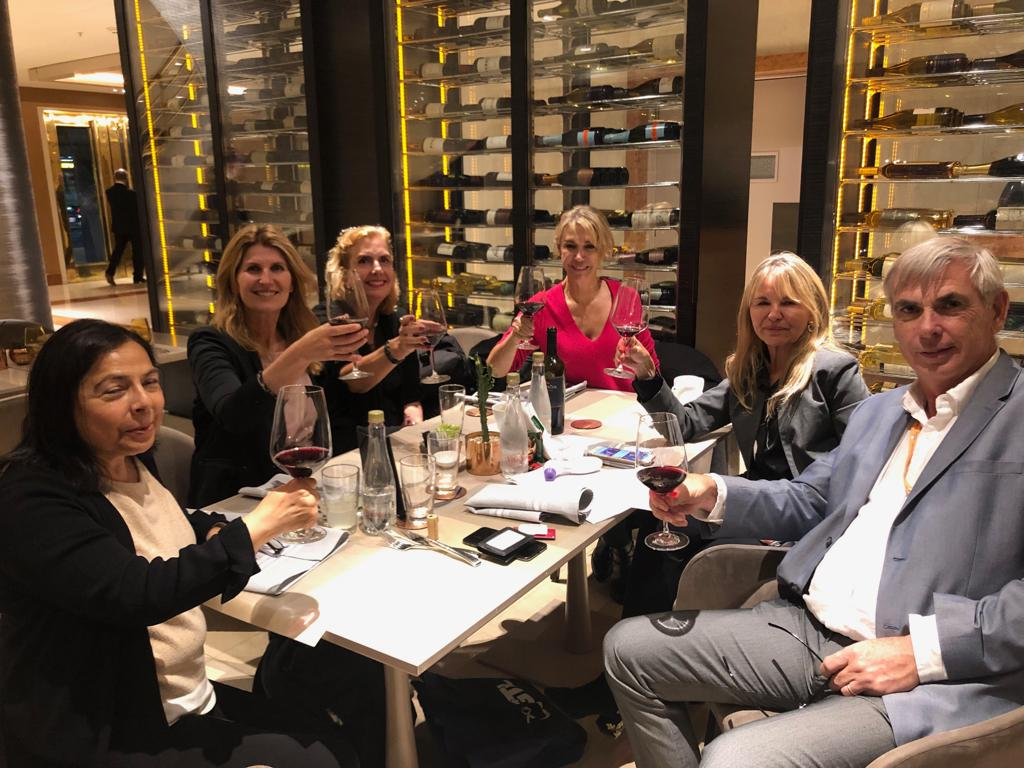