On the Ground in Ghana: A Report from Bobby Hendry (Part 1) 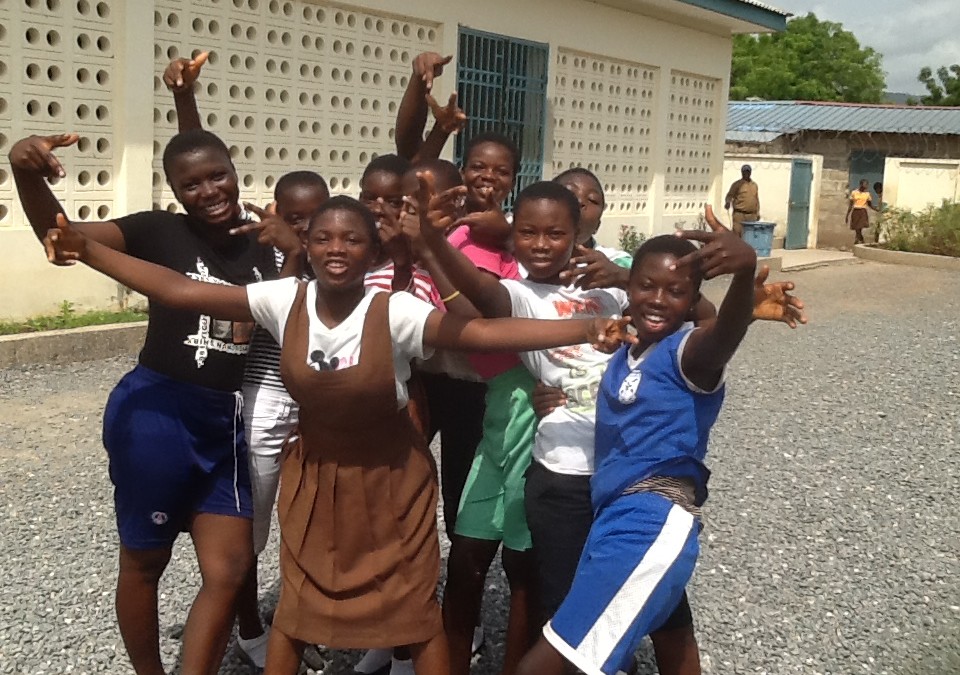 Bobby Hendry oversees meal planning, hygiene, and procedures for the Food for People (FFP) program. He recently visited the kitchen facility in Otinibi, Ghana and logged this report.

Arriving at Kotoka Airport in the evening, it is very hot and humid. The weather during the day is even hotter. It is approximately six weeks before the start of the rainy season. 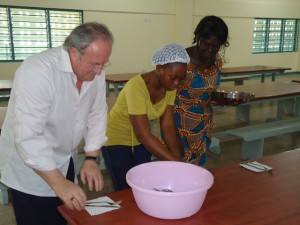 The first question I have for Facility Manager Sam Koti Dsene after he picks me up from the airport: “How is the economy?” “Very bad,” he replies, with the interest rate running at a staggering 33-34%.

The exchange rate is better than before, but as everything has gotten more expensive, it is not clear if parity is maintained by present donations, or if TPRF funding will need to be increased.

Arriving at the FFP facility, it is immediately clear that the management system is working well. There is an open and relaxed feeling. Sam is doing a good job as the Manager. 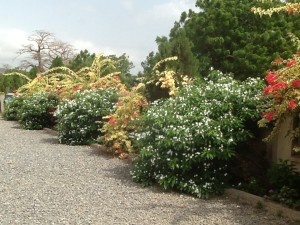 The staff quarters are finished with two new rooms built on top of the existing three-room structure. The facility looks good with the bordering bushes and flowers having matured nicely.

I arrive in time to see the end of the first lunch session. (There are two sessions today as it’s the school’s sports week).

The kids have changed since the last time I was here. They are much more open and willing to have a laugh and a bit of banter as they queue for their lunch. All the boys are wearing Barcelona Football Club shirts. They have been playing soccer. I ask some of them sitting at a table if they are going to win today. They all say “yes” wholeheartedly. I ask them how they can win when Barcelona’s star player, Lionel Messi, is not on their team today, but still in Spain. The girls are laughing and the boys look a bit sheepish all of a sudden. 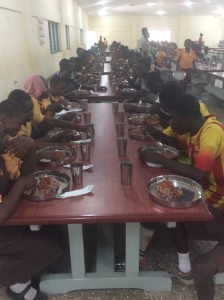 Approximately 568 lunches are served that day, mostly to kids. Meals are delivered to the homes of 44 elderly and sick people.

Unfortunately, the chicken farm was closed due to a large number of local Bird Flu cases. The flu did not come from our chickens but were in a catchment area with a lot of other farms nearby. The Ghanaian government banned the transport of fowls everywhere. In the interest of protecting the volunteers and children, Sam and the board decided to close the operation down.

We may start it again in the future should the conditions become favorable.

The vegetable farm is not producing much right now due to the extremely hot weather. Only cabbages and the fiery Scotch Bonnet chilies are growing. For now, they are purchasing all their produce needs locally, but will start planting soon when the rainy season starts.

It’s good to see the freezers are full of smoked fish and chickens bought when the prices were optimum.

As it is the 10th anniversary of the FFP program, TPRF volunteer Francis Ahore, who lives in Accra, is here to film an interview.

In discussions with him, I hear of a good development. 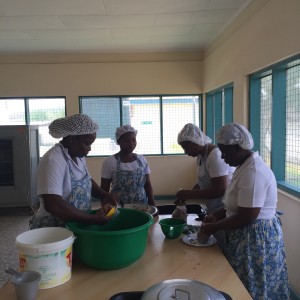 Francis, who is heading up the Peace Education Program in Ghana, tells me that after the prison inmates finish the workshops, they are given a certificate of participation. At the celebrations, up to 200 of the participants are served a meal that has been cooked at the facility and transported to the prisons. He says that national TV outlets are interested in covering the PEP events and the food kitchen. It is heartening to see the synergy between these two very different types of TPRF programs.

The PEP is now available at five prisons. Two are in Accra. Amazingly, Francis tells me that TPRF, in partnership with the local Ghanaian organization Asomdwee Nsem Association has been given permission by the Director General of the Ghana Prisons Authority to offer PEP in all of Ghana’s 45 prisons.