The Adventure Project set an ambitious goal.  Blog writers and their readers worldwide responded with enthusiasm, compassion and generosity.

The idea came to Becky Straw and Jody Landers, Co-Founders of the Adventure Project, from members of their organization, known affectionately as the “Tribe.”  One week before World Water Day (March 22nd) blog writers proposed a challenge to raise $10,000 in one day by promoting the Adventure Project’s latest initiative: repairing broken water pump handles in northern India.  The anticipated results of the initiative are twofold.  By bringing wells that have fallen into disrepair back into use, 300 more people per month (3,600 per year) will have access to clean water.  In addition, the initiative will provide training and jobs to enable unemployed people to lift themselves out of poverty. 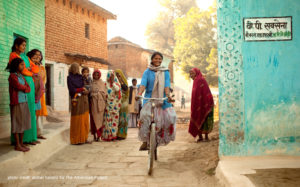 A Pump Mechanic Rides to Her Next Job

Becky thought the tribe members might be able to recruit 50 bloggers to promote the fundraising effort.  Jody, an eternal optimist, suggested 100 bloggers.  One week later, 137 bloggers had signed up to participate.  As the final seconds of World Water Day elapsed, the amount raised reached $11,390.  Donations are still rolling in.  All funds collected go to WaterAid, a charity that takes a unique approach to providing the poorest communities with potable water.

“It all came together like magic,” Becky reports.  She asked her friend and colleague, Nicole Skibola, to find a company that might be willing to provide matching funds for the promotion.  In her role as a “Social Innovation Strategist” with Apricot Consulting in New York City, Nicole works with corporations to create and execute effective programs for social change.  A former attorney, Nicole also serves as a “Social Enterprise Advisor,” for the Adventure Project.

Nicole e-mailed a list of her friends and business contacts in an effort to locate a matching funds sponsor.  Kathya Bustamante’s name happened to be on the list from a position she previously held with UBS.  Kathya, among other interests, now volunteers for TPRF as Manager of the Fundraising Team.  Kathya  recognized a common thread between both organizations:  “Clean Water” and “Dignity.”  She forwarded Nicole’s request to decision makers at TPRF.  Within twenty-four hours, TPRF committed to providing up to $10,000 in matching funds.  “Awesome,” Nicole commented in an e-mail to Becky and Kathya, “the fastest foundation response in history.” 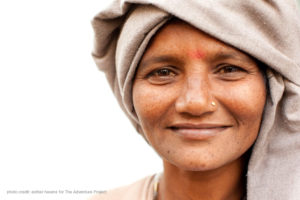 One final footnote—Although TPRF agreed to provide up to $10,000 in matching funds, we surprised everyone involved by cutting a check for the full amount of the funds raised on World Water Day: $11,390.

“Your response was so amazing and so responsible,” Becky said about TPRF’s participation.

*Photos courtesy of Esther Havens for The Adventure Project