In 2011, TPRF agreed to match funds for an ambitious initiative organized by The Adventure Project to raise funds during the week of World Water Day (March 22) to repair broken water wells in northern India.  137 bloggers participating around the world helped make the fundraising initiative an overwhelming success.  Here is a report by The Adventure Project describing the significant results of the program to date. The original article appeared in the TPRF blog under the Title “Mission Accomplished on World Water Day” (March 28, 2011). 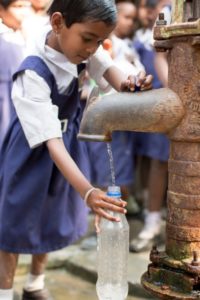 This gift will truly transform water services for communities, schools, and health clinics, so people will no longer have to use unsafe water sources or rely on external organizations for assistance in repairing or replacing their water systems. In addition, these fifty people will now have good jobs, increasing their livelihoods and dignity for themselves and their families.

So far, 148 people are currently hired and receiving training in how to become a well mechanic. Program participants receive a bag of tools, education, and a one-year stipend to help get their enterprises off the ground. Here is a breakdown by district.

Fifty Jalabandhu were slotted to be trained in three blocks in the district of South 24 Parganas (Kakdwip,Budgebudge I and Budgebudge II), in the state of West Bengal, India. However, after meetings with the local government leaders and completing an analysis of the water points the Jalabandhu will serve, it was decided to start with 42 well mechanics for now.

The three blocks have a total population of about 567,000 with approximately 1600 water points, which works out to approximately 38 to 40 water points per Jalabandhu. Of the 42 well mechanics, only five are female. This is a very conservative area, so it is unusual for women to work outside their homes. We are hoping that the five women become positive examples, prompting other women to join in the future.

This February, we captured one of these women’s stories. You can read Rani’s story here. 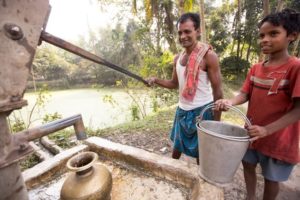 Sadly, Maoist rebel activities have led to security issues in Kashipur block of the district of Purulia. Plans were to train 30 well mechanics in this area, but staff report feeling unsafe walking in public and riding the buses. Water for People India decided to pause the program in Purulia as a safety measure. Therefore, the funds to train 30 well mechanics have been reallocated for a refresher course in South 24 Parganas. Thirty-eight well mechanics hired in 2010 and 2011 have signed up for the refresher course.

These refresher trainings are critical in understanding the challenges the Jalabandhu are facing in the field and building their technical and troubleshooting skills to address these problems. The refresher course brings together the well mechanics to share and discuss the issues they are facing as a group, to identify solutions, and provide additional technical guidance on repair and maintenance of pumps. 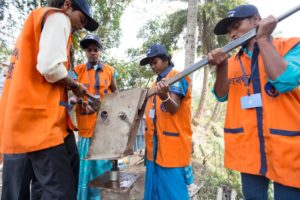 In addition, these refresher courses will expand the skills of the Jalabandhu trained in 2010 and 2011 by including training on water quality testing, using simple test kits and water sampling for government testing laboratories.

While we are sad that Purulia will not receive 30 new well mechanics that are needed, we are proud to support the reallocation of funds, as it is a safe and wise decision. Our goal is always to do what is best for the local partner.

Thanks to The Prem Rawat Foundation, the program in India has enough funding to continue working through the end of this summer, 2013. Thank you for the work you are doing and the lives you are inspiring with your words of peace and acts of compassion.