“Inside Peace” Screening Leads to Peace Education in Cornwall, UK 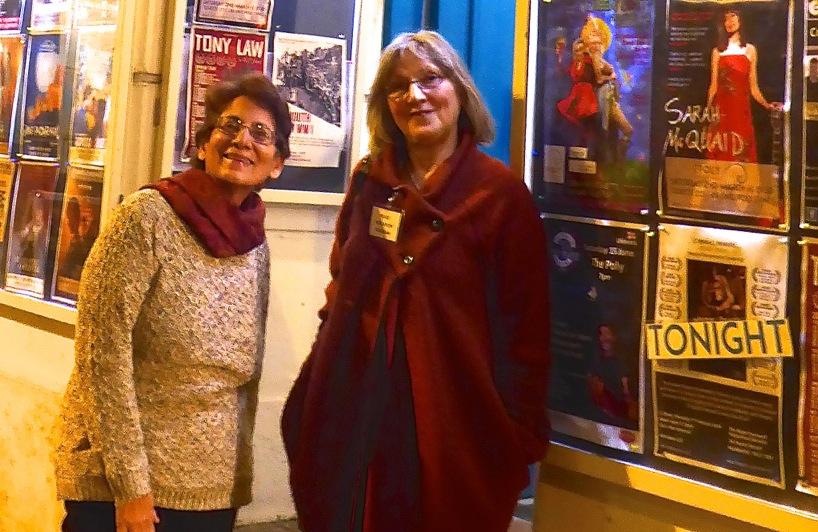 After finishing university and then bringing up three children on the beaches of Cornwall, U.K., Irene Woodhead has spent most of her working life in Marketing and Sales. She enjoyed the creative aspect most. She is now retired, living back in the U.K., after an extended nine-year retirement holiday in Spain. Irene and a team of volunteers in the U.K. launched the Peace Education Program (PEP) in Cornwall by inviting locals to a screening of the multi award-winning documentary, “Inside Peace.” 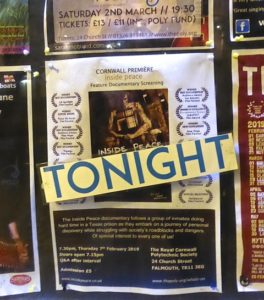 On a wet and stormy night in February 2019, more than 80 people came to the Royal Cornwall Polytechnic Society (the Poly) in Falmouth to watch “Inside Peace.” The film movingly documents the transformation of four inmates who participated in peace education workshops at Dominguez State Prison in San Antonio, Texas and the impact that their positive choices continued to have on their lives after being released.

The PEP team publicized the screening extensively in Cornwall. A wide variety of guests attended, including Paul Haines, a goodwill ambassador of Children of Peace, and local members of A Band of Brothers, a national organization of volunteers who do therapeutic work and mentor troubled young men. Some of these people had no previous awareness of the Peace Education Program.

After the documentary, there was an opportunity for the audience to pop into an exhibition where they were able to watch a DVD about the Peace Education Program and look at related printed materials.

The exhibition gave everyone a chance to ask questions about attending the PEP workshop or facilitating them at their organization. People also took a healthy interest in our well-stocked cake stall, which did a roaring trade!

Two volunteers, Liz Norris and Andrew Spiers, who facilitate PEP in a prison setting, and Pauline Cook, representing Peace Partners, very kindly drove down from Somerset and Devon to form a panel of speakers for the Questions and Answers session. 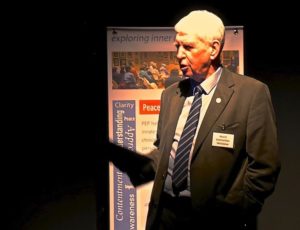 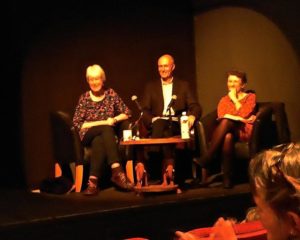 This was a really lively session. In addition to focusing on the PEP in prisons, the panel and audience members explored the possibilities of offering the program to other groups, such as young people.

In fact, the discussion was so animated that we had to bring it to a close to prevent all of us from being locked in the Poly for the night! 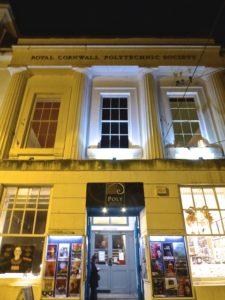 We filmed viewer’s reactions to “Inside Peace.” The documentary is an ideal introduction to PEP for people who have never come across it before.

On a personal note, I would recommend “Inside Peace” to anyone. I was so moved and impressed by the intelligence and insight shown by the inmates and by the warm human responses the PEP evoked in such an uncompromising setting.

Following up on the interest at the screening, the local team is running a PEP at the Fish Factory, a lively local arts center near Falmouth. We had our first PEP session on March 27, and on a cold late evening 22 people came out to enjoy the workshop’s videos of Prem Rawat`s message, the majority of whom had never heard him speak before.

The local team and I feel the “Inside Peace” screening was a privilege to host, and we are both grateful and excited to be involved in the new PEP project. Weekly workshops will continue until the end of May, and there are tentative plans to introduce PEP at the Falmouth University in the autumn.

Watch some of the viewer’s reactions to the “Inside Peace” screening: