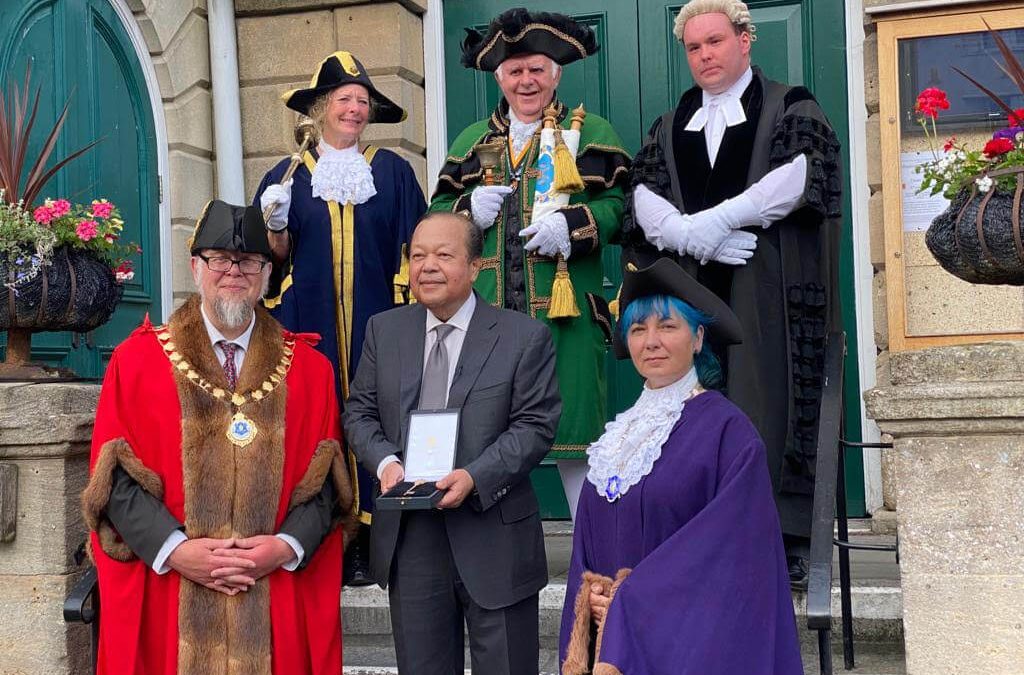 Prem Rawat, peace ambassador, speaker and New York Times best-selling author, was today bestowed the honor of the “Key of Avalon” by the Council of Glastonbury at a ceremony held at Glastonbury Town Hall.

Presiding Mayor, Cllr. Jon Cousins, and Council members hosted the ceremony in acknowledgment of Prem Rawat’s 50 years of working for peace across the world and for his services to humanity.

Prem’s extraordinary life-long journey began in the West on a school holiday from his native India, with a surprise appearance at the Glastonbury music festival in 1971, when Prem was just 13 years old.

Asked to address the 12,000 strong audience from the first ever Glastonbury Pyramid stage – now an iconic feature of the music festival – the teenage Prem Rawat talked about the importance of practical peace for all of humanity.  His speech inspired many people who heard the teenage boy, who had begun speaking about the subject of peace when he was just 4 years old! Prem was amongst such luminaries as David Bowie, Fairport Convention, and Hawkwind at the now largest music festival in the world with a global TV audience of around 1 billion.

Some of those who were at the Glastonbury festival in 1971 attended today’s ceremony – some 50 years later – to express their gratitude and thanks to Prem Rawat for how their lives have been so positively impacted by his message.

Watch a replay of the ceremony embedded here via Prem Rawat’s YouTube channel:

Quote from the Mayor of Glastonbury: “The inspiration for this new Civic Honour comes at a time when the world has faced great challenges, conflict, and trauma – and there is no better person in my opinion to be the first to receive the Key of Avalon than Prem Rawat, a global peace ambassador who has travelled the world with the simple yet practical message: peace is possible.”

About the Key of Avalon

Inspired by the ancient tradition of gifting the keys to the city to “trusted friends of the community,”  the Key of Avalon is a new civic honor created by Glastonbury Town Council, which symbolically gives the recipient the liberty to come and go, as they will, to the town in the knowledge that they are “a trusted friend of Glastonbury.”

For more than 50 years, Prem Rawat has spoken to hundreds of millions of people in more than 100 countries to communicate his message of peace. Born in India, Rawat gave his first public address at the age of four, and at 13, began speaking around the world. The New York Times bestselling author of “Hear Yourself- How to Find Peace in a Noisy World,” Rawat founded The Prem Rawat Foundation in 2001 with the mission to address the fundamental human needs of food, water and the often-overlooked need for peace. The award-winning Food for People programs in India, Nepal and Ghana have transformed entire communities.  He also created the Peace Education Program, which is taught in prisons; in countries ravaged by war; in veteran centers and in hospitals in more than 75 countries and 600 prisons. The program (also used in schools and in universities worldwide) has reached all walks of life, including those marginalized by society and conflict, and inspires participants to experience real personal peace. In 2012, he received the BrandLaureate International Hall of Fame Lifetime Achievement Award, becoming only the fourth recipient of the award (with previous winners including Nelson Mandela and Steve Jobs). Rawat is also a pilot, inventor, photographer, classic car restorer, husband and father of four children, and grandfather to four grandchildren.