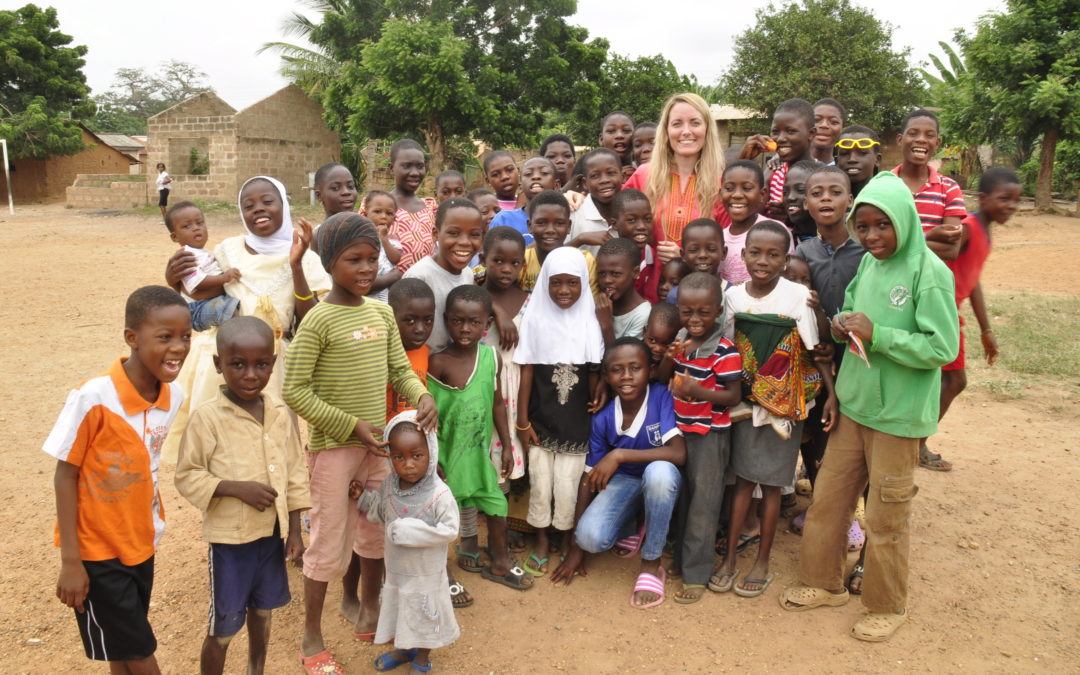 Louise Roenn recently visited the Food For People (FFP) facility in Otinibi, Ghana, and meeting the children, teachers, and staff had a profound impact on her. Here is her personal account.

The plates are huge—almost bigger than the children carrying them. African spices fill the food hall. Young, playful voices light up the air. 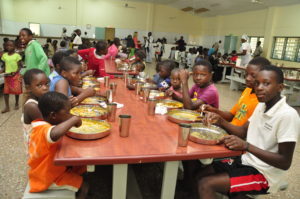 700 meals are served every day at the Food For People facility in Otinibi.

It’s lunchtime here at the Food For People facility in Otinibi, Ghana. I’m supposed to do a video report with photographers Alex and John, who are roaming around with their cameras, snapping photos of some of the 200 children around the dining tables. But right now, I’m too moved for words and too choked up to speak. I’m watching the children’s faces, their colorful outfits, their playful gestures, and their beaming smiles.

“The idea is simple,” Bernard explains as we walk around the food hall. “Serve one nutritious meal a day from locally grown produce to school children.” A group of boys are washing their hands. Others are going up to the counter for a second serving. 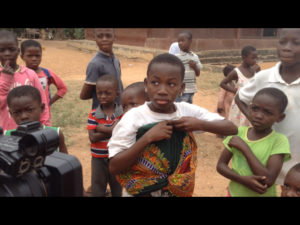 Student Anili with her brother Bani on her back.

“The girl over there has brought her brother,” Bernard says and points at a girl with trimmed, black hair, a white t-shirt, and a scarf wrapped around her chest.

She’s feeding a little boy next to her with her hands. He’s chewing the rice and traditional beans, and looks like he’s about two years old. His sister looks like she is six or seven.

“Why did you bring your brother along today?” Bernard asks the girl, Anili, moments later in front of the Otinibi School. We’ve walked through the village of modest houses and sheds, and set up the cameras to interview students and teachers. About 60 curious children ages 3-12 crowd around us in the hot, midday sun. Anili is carrying her brother Bani on her back, wrapped in a scarf. She responds in Ga, her local language, and John translates. “There is no one at home to cook,” John says. “She brings her brother with her so he can get food.” 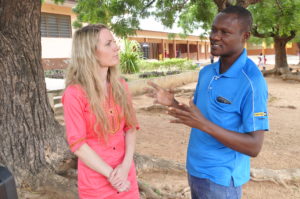 Teacher Ken is pleased about the results of the FFP program.

Inside the schoolyard, Bernard introduces me to a teacher, Ken, who has taught at the Otinibi School since the start of the FFP program in 2012. He tells us that the enrollment has increased from 400 students to about 700 during the past four years.

“The children used to drop out of school to work because the parents needed money to buy food,” Ken says. “Now, the parents keep their children in school because the children get fed. Some students are now continuing on to high school with the potential of further education. We are very happy to witness this development.” 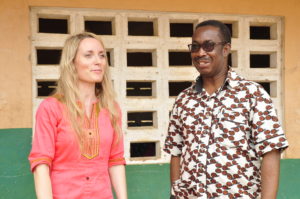 Bernard Modey describes his involvement with FFP as “humbling and very touching.”

Bernard takes us to the Aisha Bint Khalifa School right next to the Otinibi School. Construction work is going on in the schoolyard, and he tells us that 110 students from this school started being included in the Food For People program in May.

“This school is now expanding with new classrooms because they expect the enrollment to go up,” Bernard explains and points at ten men lifting bricks off the red ground.

When I ask Bernard what it means to him personally to be involved with the Food For People program, he gets tears in his eyes.

“It’s humbling and touching,” he says, putting his hand on his chest. “People’s circumstances differ. People come from different backgrounds. If you don’t have means, you may not be able to go high. But this program can really change all that for people.” 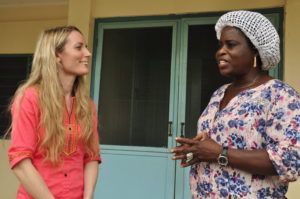 To head cook Roselyn, love is as important as food.

Back at the food hall, we run into Roselyn who is the assistant head cook. She prepares the menu and serves approximately 700 meals per day for the children and an additional 35 meals for elderly members of the community.

Roselyn has recently moved into the new staff housing across the courtyard from the kitchen. Now, she and her colleagues only have to walk a few feet to be at work every morning at seven.

“We don’t just cook for the children,” Roselyn says in her airy, floral shirt. “We give the children love and care. It’s important to us that they feel the love.”