The earthquake in Haiti hit the island with a double hammer blow.  The government now estimates 230,000 people have lost their lives and more than 2,000,000 have lost their homes in the wake of a 7.0 Richter earthquake and the subsequent aftershocks.  The most destructive aftershock, however, has been the deadly cholera outbreak that has claimed 2,600 lives and infected more than 120,000 people.  Official estimates project that as many as 600,000 people could be affected by the cholera outbreak. 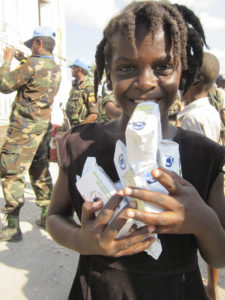 A Child Clutches Food Packets in the City of Leogane Haiti

It is difficult for anyone without a first-hand perspective to comprehend the enormous recovery task facing governmental and humanitarian organizations struggling to deal with the catastrophe. Only about half of the Haitian population had access to clean water and adequate sanitation facilities before the earthquake struck. The natural disaster in Port-au-Prince has pushed many area residents to the brink of survival

TPRF has responded to the crisis in Haiti with optimism, hope, and a determination to offer aid services in an intelligent and efficient manner. Working with three partners, the Foundation has made four grants totaling $190,000 to provide food, clean water, and training to survivors in critical need.

Within twenty-four hours of the quake, TPRF teamed up with one of its ongoing partners, World Food Program USA, to distribute a one-week supply of high-energy biscuits rich in protein, vitamins and minerals. TPRF’s partner distributed sixteen million biscuits to survivors without immediate access to cooking facilities. The grant also helped to facilitate the establishment of hot food kitchens strategically located in hospitals, schools, and the devastated town of Leogane near the earthquake epicenter.

In February 2010, a month after the earthquake, TPRF partnered with the AmeriCares Foundation to help provide a two-week supply of bottled water for 42,000 people. The joint initiative distributed purification sachets to produce 13 million gallons of potable water in communities where none was available and distributed oral rehydration solution and salts (ORS) to treat 125,000 children and adults at risk of severe dehydration and water-borne illnesses. To prevent water-borne disease from contaminated water, AmeriCares executed an ambitious plan to deliver bottled water to survivor camps, shelters, and medical facilities. In addition, AmeriCares provided clean water buckets and demonstrations for survivors on how to use the water-purification sachets as part of their overall program in Haiti.

When cholera turned up in Haiti last October, it was the first time any cases of the disease had been reported on the island since 1960. Few Haitians knew what caused it or how to prevent it. In response, TPRF teamed up again with AmeriCares and also with Mercy Corps in December 2010 to provide nearly 53,000 people with access to clean water, sanitation goods, and hygiene education.

“Mercy Corps’ Water, Sanitation, and Hygiene (WASH) program will ensure drinking water supply and sanitation services for community centers in the Central Plateau region,” said Mercy Corp’s CEO Neal Keny-Guyer. We will train masons in the construction of latrines and rainwater tanks. Households of the most vulnerable beneficiaries will receive assistance with water supply and sanitation. Public education, another important aspect of successful water and sanitation programming, will ensure that affected populations prioritize basic hygiene practices that promote health and prevent disease.”

Mercy Corps personnel are also executing a comprehensive education program about cholera prevention and treatment. They will recruit and train volunteers from 30 Haitian districts to do presentations to school and community groups, and to perform educational plays in public venues. In addition, widespread distribution of printed materials will reinforce the message.

“None of this would be possible without the inspiring investment of organizations like The Prem Rawat Foundation,” Neal Keny-Guyer added. “On behalf of all those who benefit from your generosity, thank you for partnering with Mercy Corps to make a positive, lasting difference in the world today.”