How different is life in southern Ghana from your life? Read this first-hand report from guest blogger Bobby Hendry to find out.

Ms. Grace Ninsaw, the headmistress of the Otinibi School, told us to come early in the morning for our interview with her. I went bleary-eyed with Sam Dsane, the Assistant Project Manager. Grace greeted us, and we went to her very simple office at the corner of the school where she has a good wide view of the open play area. While talking to us, her sharp eyes missed nothing. She excused herself a few times to admonish some unruly pupils. A few of the older kids were cutting grass and cleaning up the whole area.

Grace started by saying that two days earlier the Greater Accra Regional Minister, GNA-Nii Armah Ashitey, and the District Chief Executive for GA East, Mrs. Ernestina Arthur, had paid a surprise visit to the school. The impromptu visit was apparently the result of an interview with Grace that appeared on the Accra TV evening news. Stories about Ghana’s schools have been in the news lately. Yesterday’s Accra newspaper quoted the Minister as saying that he had found fifteen pupils in one class using two desks. He pledged to take care of this and all furniture problems in the future.

The District Chief Executive reported that school enrollment was rising. As a result, the Government has decided to embark on an enrollment drive to encourage more parents to send their children to school. A major obstacle to the success of such drives is that the majority of the districts are in farming communities. Many parents continue to send their children to the farms despite government intervention. 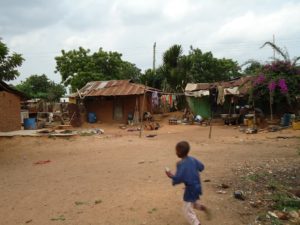 An Otinibi Child at Play in the Village

When three representatives from Otinibi joined us later, we were able to ask them questions about village life. They told us that the only crops grown in the area are maize, cassava, and vegetables. I asked about livestock, as I had seen a few cows and goats when driving from Accra.  The villagers told me they were not rich enough to own animals. The livestock I had seen belonged to wealthier private owners. The only farm animals I saw scattered around the village were chickens. When I asked if theft was a problem, Sam explained that  people keep them secure inside their homes at night.

Grace then showed us the school enrollment book, which showed nineteen new students. I asked her what caused this spike in enrollment. She explained that the school had recently undertaken sensitizing meetings with the villagers to inform them about the Food for People project. She went on to say, “The parents want the children to be fed, and they now know that they will get food at school. This is why there is a sudden increase in enrollment figures. The locals are very excited.”