A Night in Rome 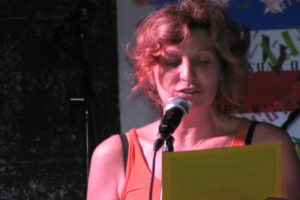 Isolda Basic reads an original work of prose on the theme of finding peace.

The performance was already underway when we arrived by taxi at the Felt Club, a modern looking but otherwise nondescript venue in the Quartere San Lorenzo district of Rome this past Friday (June 22) evening. Our host, Loredana La Rotonda, found me in the lobby, family in tow, trying to identify myself to the maître d’. She led us to the darkened showroom, where a woman onstage was reciting an original prose work to a background of electronic music and projected visual images. My Italian is quite limited, but I did catch repeated references to the word “peace.”

The audience sat in rapt attention and applauded vigorously. I immediately thought of an updated version of beatnik-era poetry readings, with the audience highly focused, drinking in the author’s intent and meaning. One woman wept at her table. The reading was followed by a musical interlude with guitarist Pino Siciliano and keyboardist Monica Borra with multi-media imagery, additional readings, and more music. Just before the break, a recent video was shown about the success of TPRF’s Peace Education Program (PEP) in a Texas prison. The PEP prison program has also taken root in Italy, and this event was the culmination of a series of arts events in June to raise funds for TPRF’s work. 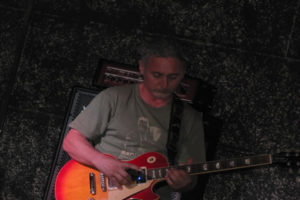 By coincidence, I was traveling in Italy with my wife and two teenagers, staying for a few days near Rome as guests of Loredana in her lovely country house in the village of Mazzano Romano. Loredana volunteers as the Italian translation team leader for the TPRF website and has also acted as a direct translator during a number of Prem Rawat’s public addresses in Italy and Europe. We were happy to accept her invitation to attend this TPRF event on Friday. My kids especially appreciated that we were going to an air-conditioned room after a hot day of sightseeing!

I was informed during the break by Daniela Missori, one of the local organizers, that there had been two previous multimedia musical events at this same club this month on behalf of TPRF, along with an ongoing art exhibition on its walls. The artwork was provided by its creator, noted artist and photographer Emilio Gentilini. On this evening, he sold a large painting for 1000 euros which he is donating in full to TPRF. 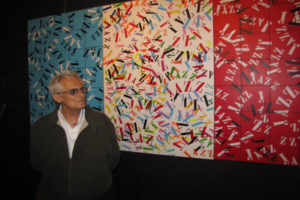 The event was a combination musical concert, poetry reading, and art exhibition. Included in the multi-media potpourri were videos about the Foundation’s Peace Education Program.

Local fundraisers came up with an innovative approach for staging events by working out a joint venture with the club operators. By offering up an appealing mix of entertainment at no charge to the club, the venue and much of the promotion (they have a huge mailing list) were provided for free by the club and a revenue sharing arrangement was worked out on the modest cover charge and drinks sold. Other than the cover charge of 5 euros, the show was essentially free to the public, which was a big factor in attracting attendees, most of whom, I was told, had not been aware of the work of TPRF before the show.

I enjoyed meeting a number of the volunteers during the break, some of whom I had met or communicated with over the past several years. Many of them had traveled here from as far away as Turin and Florence to participate. The enthusiasm and energy of the volunteers was palpable, no doubt fueled in large part by Prem Rawat’s visit to Italy earlier this month. 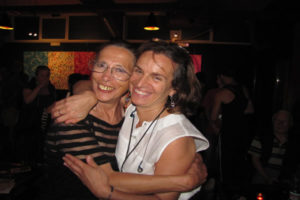 Daniela Missori and Antonella Romeo, two of the principal organizers of the Rome event series

In spite of the high-energy atmosphere, it got to be past 11 p.m. and I spotted my daughter fast asleep on a lobby chair. The Rome night-lifers were heading back into the clubroom for more music (two more groups were scheduled to play), others were catching late trains home, and my family of four all piled into Loredana’s car for the ride back to Mazzano. A full day!

I understand that there may be a more detailed feature story shortly about this and other initiatives in Italy by the organizers themselves, so please stay tuned!