Pollsmoor Prison – Honey in Our Ears

Pollsmoor Maximum Security Prison, located south of Cape Town, once housed one of South Africa’s most eminent citizens: Nelson Mandela. He was moved from Robben Island to Pollsmoor in 1982, where he remained for more than six years.

Today Pollsmoor is a large prison with an inmate population of around 7,000. Some of South Africa’s most dangerous criminals are incarcerated there.

In this harsh environment, a Peace Education Program (PEP) was started in early 2013. A small but dedicated group of volunteers have run two ten-week courses with 28 inmates in each group so far. Janice Maguire was the MC for some of these workshops and had to be pushed into the prison in her wheelchair as she has Multiple Sclerosis. The class started with Janice slowly rising from her wheelchair into an upright position and welcoming everyone.

Among the attendees was Lester Parrish, 52 years old, imprisoned most of his life for stealing cars, and most recently for much more serious offences. He sat morosely at the back, locked within himself, unwilling to make contact or communicate with anyone.

Each week the attendees watched themed videos from Prem Rawat’s international addresses. They listened, and if they wished, they could express something about what they had understood or felt during these videos. Lester remained silent until the third week when he mentioned that, for the first time in years, he’d been able to sleep in his cell. There are approximately 20 to 30 men in each cell; the noise level is extremely high. “Even if nothing else happens,” he said at the time, “I’m grateful for the sleep. Something inside me was always biting me, stopping me from sleeping. But since I listened to Prem Rawat, I feel that biting is not there any more.”

A few weeks later Lester wanted to express something else. He said he’d been talking to other prisoners about the profound shift in his being from having heard Prem Rawat’s talks. Apparently, the warden had also noticed the difference in Lester, who was spending more and more time engaging with other inmates, speaking to them about their potential even in prisons. As the weeks of the course went by, he moved to the front of the class and was happy to get up and talk about his discoveries. “Whether you’re in prison for one year or twenty years, that heart is there, too. It follows you in, and it goes out with you. So why not experience it now?”

Janice and the other volunteers facilitating the course had also noticed that he even looked better. He was standing differently and was very excited about the possibility of speaking about peace both while inside prison and after he was released. On the last day of the program, Lester expressed: “Today I’m a different person. I talk about peace to anyone who wants to know. I would love to be a peace ambassador. Thank you, Mr. Rawat, for coordinating this course. You made it all possible. God bless you.”

This feeling of gratitude was shared by many of the attendees. They mentioned how touched they were that every week the volunteers came to the prison, rain or shine, and how incredibly grateful they were for their consistency.

Another inmate, Luqmaan, is a devout Muslim in his 50’s, who has taught himself to read and write in prison. He is friendly and loves helping other inmates, particularly those who are illiterate. He expressed his feelings of gratitude and that of his inmate friend Moegammad in a written document:

“I just want to say from the bottom of my heart a heartfelt thank you for your patience, time, sacrifices, love, motivation and 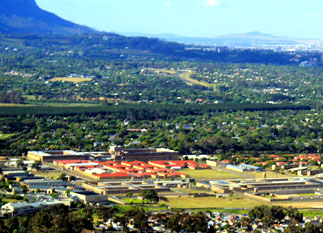 sweet inspiration. Words will not be able to explain or describe what a huge impact you have had on our lives. In a place where the truth is twisted, longing is big, and abnormality is the order of the day, you appear like the sun that chases all the dark clouds away. The uncertainties are made clear, and in your beautiful manner you come and make us conscious of so many important things, which we so often ignored and which led us to the fact that over and over we made the same mistakes and wasted precious time. Everything that you have, up to now, brought to our path, is like honey in our ears, a song in our hearts, and lots of hope to someday continue life in a more respectful, positive, loving and worthy manner, regardless of all else.”

Janice Maguire says she and the rest of the team have been very moved by witnessing the transformation of individuals who attend the course. “What I’m hearing from the attendees is that it’s the first time in their lives that they’ve been spoken to as human beings.”

After the second PEP course, the management was keen for a follow-up to take place. The change in attitude among those who completed the PEP was more than enough reason. One of the graduates, speaking warmly of Prem Rawat and his message, expressed the feeling of the group. He said they had all become a family, a real family, and he urged everyone to do the program.