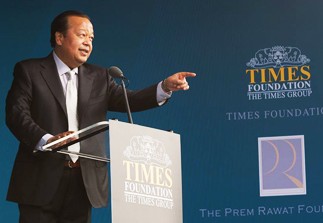 The seismic shock of the brutal bus attack in December 2012 deeply traumatized the collective psyche of India and particularly its capital New Delhi, where the attack took place. The incident’s impact, and others that sadly followed, have been felt far and wide with international media attention, leading to a sense of indignation and retrospection especially amongst young people in the city.

But last week there was a heart-warming moment of inspiration and hope to lighten this bleak image with the first ever Youth Peace Fest. The event in New Delhi had the support of The Times Foundation and The Prem Rawat Foundation and was attended by a vast audience of over 183,500 people. The event was entitled “7 Billion Reasons for Peace,” representing every person on the planet as being a reason for peace. With live music, film and speakers at the free festival, young people were entertained by messages of hope as well as being called to action. Amidst modern Indian fusion music that set the crowd alight, young professionals took to the stage to express their views on wellbeing and peace as well as the difficulties they face in the modern world.

Dr. Arvind Singh, a medical doctor from Mumbai, talked about the stress of modern life and the lack of peace he saw amongst many of his patients. His conviction was that stress was destroying the quality of life and health of millions of Indians, a fact borne out by scientific research.  Anjan Pandey, an engineer, said that in spite of his childhood dreams of being content when he was older, he now finds he has barely 3 hours a day for his personal life due to work pressures and long hours commuting. A short Vox Pop film depicted the dilemma of Delhi youth, as they expressed their desire for wellbeing and peace alongside their inability to either understand or have time for it—no doubt a dilemma not just for Indian youth but for youth across the world.

Keynote speaker, peace ambassador Prem Rawat, spoke of the need for peace as a “necessity, not a luxury.” In previous addresses he has said, “I believe that peace will be humanity’s greatest achievement.” 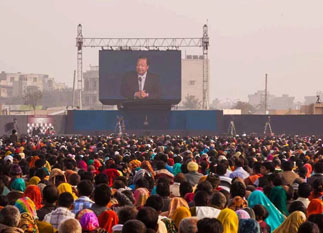 His practical message was that as people find personal peace, social peace will follow. In his speech to the huge crowd he said:
“When someone realizes peace is within them and that it is their responsibility to do something about it, then truly peace is possible. Do you understand the responsibility that goes with it? Take action! Try to understand that you are a part of it. This is the time, that if we decide, then truly peace in this world, within the heart of every individual, is possible.”Although organizers fell short of describing the event as a new Woodstock or Glastonbury, the hope is that the festival will become an annual fixture for young people.

Satellite Youth Peace Fests are planned across India in 2014, and the Times Foundation – The Times of India Group will be supporting this initiative, both in India and internationally. Event organizers expressed that the idea “is not to create a new music festival but to bring together lots of different elements focused on peace—such as film, music, poetry, dance, theater and art—making it fun, interesting and thought provoking.”

The ambition is clear: to build a culture of peace among the young. It is a small step in the fight for peace but a heartening one, and one that may yet bear fruit.